The best mice and trackpads for iPad & iPad Pro, tested

By connecting a mouse to your iPad or iPad Pro, Apple’s popular tablet becomes even more powerful and productive. We tested a stack of mice and trackpads to see which ones perform best, offer the most features, and have the best design.

The best mice for iPad

Input lag is an important measurement of a mouse or trackpad, and it’s best to see how they perform for yourself by checking out our how-to video.

Both of these devices had the slightest lag when navigating iPadOS, with input lag unnoticeable under normal use. Magic Trackpad also offers a huge range of supported multi-touch gestures, such as jumping between apps, switching between Slide Over apps, pinching to zoom in and out, or swiping back a page in Safari. .

As we continued to test various mice and trackpads, the best third-party Bluetooth mouse was the Satechi M1. This mouse had the least lag among the lot. 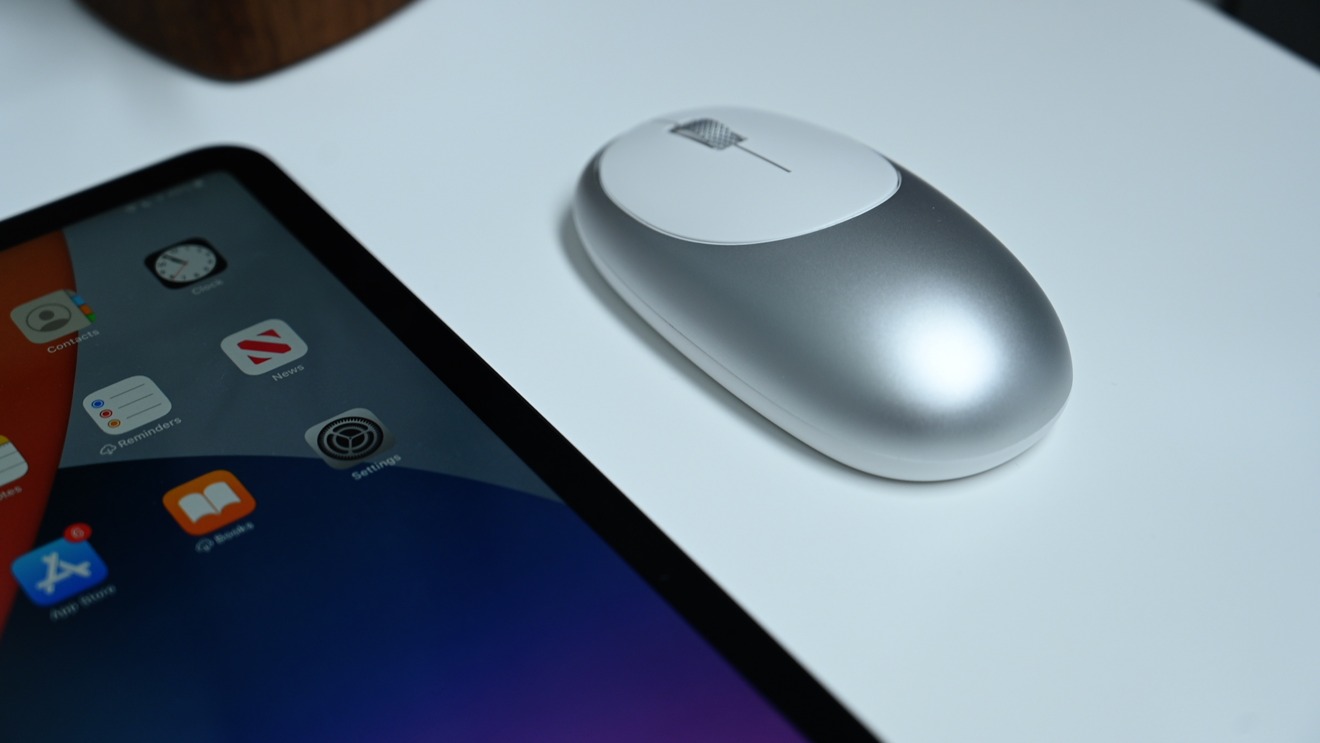 Not to mention, the M1 has a great design. It looks like Apple’s previous mouse design which is a bit round and bulbous. The body is aluminum, which matches Apple’s aesthetic pretty well.

Recently, Logitech updated its Master line for Apple users, with the release of the MX Master 3 mouse as well as MX Master Keys. We were very impressed with both on the Mac, but they work well on the iPad as well. 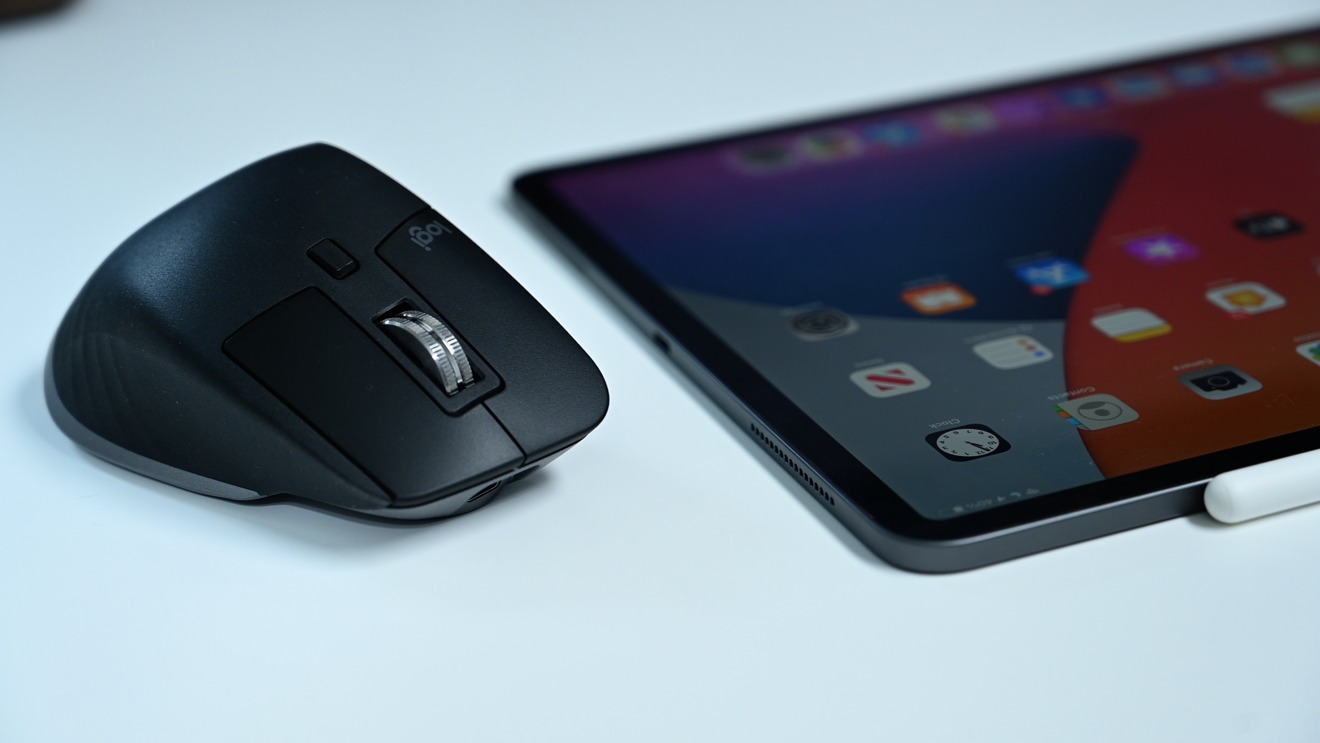 MX Master 3 performs better on Mac than iPad, but only because of the huge array of special features that can be customized through its macOS utility. On iPad, not all of these features are present, such as the gesture-based thumb button.

Yet it’s still one of our favorites. The mouse has a great ergonomic shape that feels perfect in your hand when you use it for long periods of time. The scroll wheel is metallic and tactile and can alternate between free and notched rotation thanks to an integrated magnet and a rocker button behind the wheel.

On iPad, however, it still has additional features. By pressing the button under the thumb, you can access the previously used application. If you hold this button down, it opens the app switcher where you can choose which app to open.

This mouse does have some lag though, as you can see in our video above. It’s not dramatic and it’s achievable – but it’s noticeable.

Apple iPad is known as an incredibly powerful device while still being extremely portable. So it makes sense to pair it with an equally portable mouse. 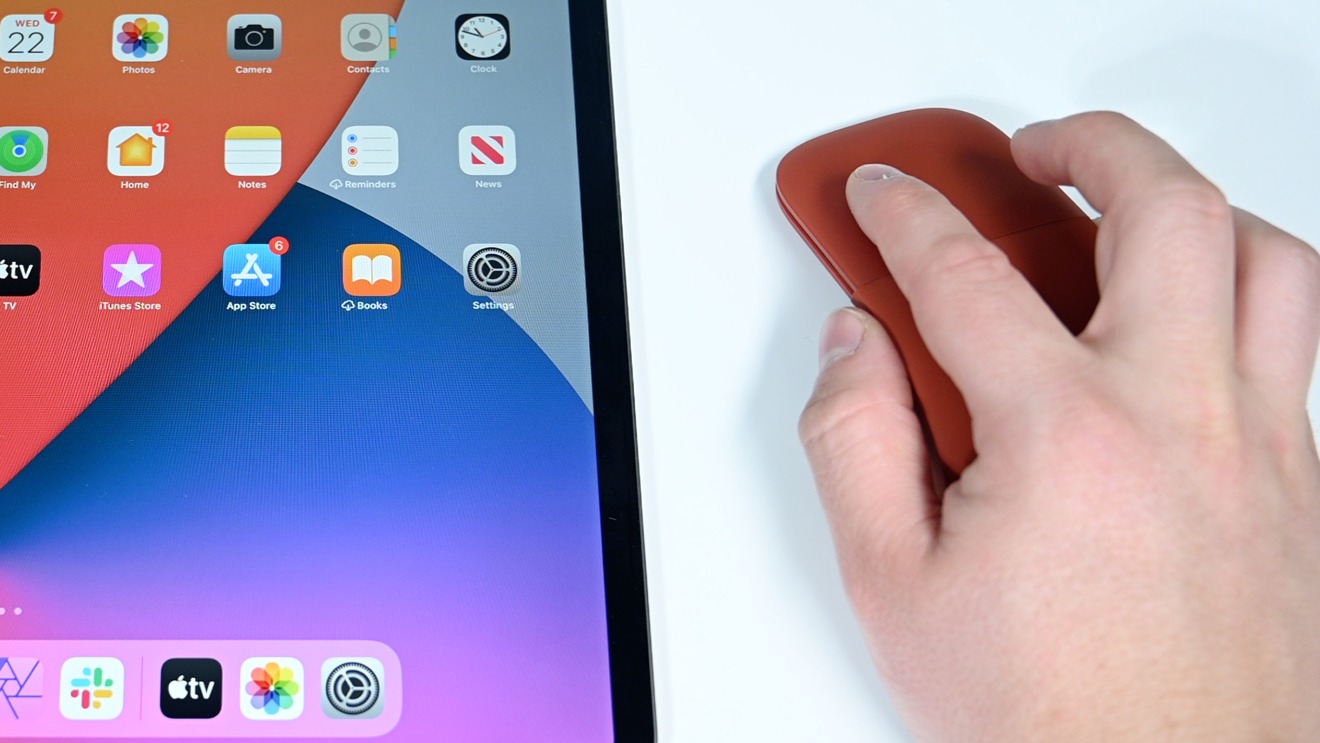 The Surface Arc Mouse starts off completely flat, but when folded, it forms a subtle arc that fits in your hand. When flat, the mouse is turned off, but when curved, it turns on automatically. It is pleasant to use and comes in several colors.

It has a soft and comfortable silicone body with a plastic front that can click. It also scrolls through this touch surface similar to Apple’s Magic Mouse 2. 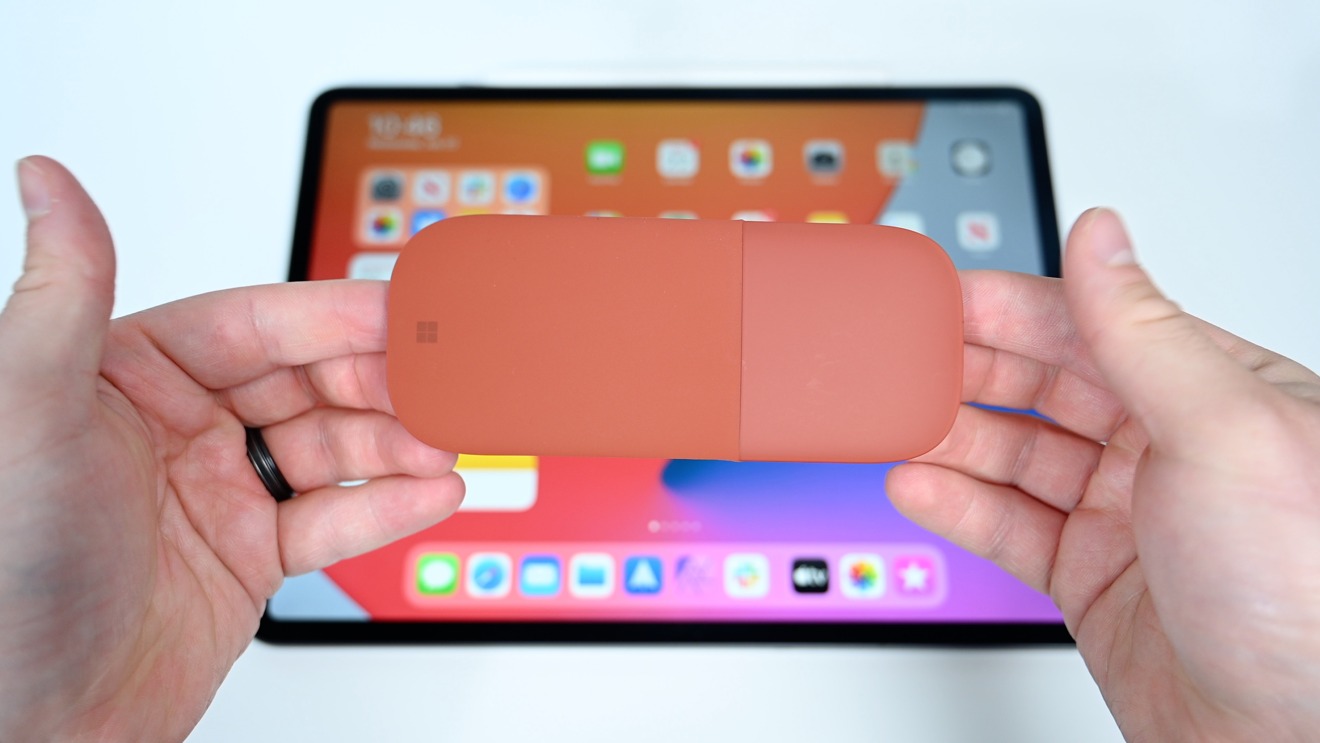 Like the Logitech MX Master 3, we also noticed a lag. Notably, this lag manifested itself most with over-scrolling and bouncing. It’s not necessarily the fault of these various companies, as it doesn’t show up in macOS, but it’s an issue with iPadOS.

The Logitech K830 stand is unlike any of the other options on our list. It combines both a keyboard and a trackpad in one device. It was typically designed for use with set-top boxes or smart TVs or even a media center PC. 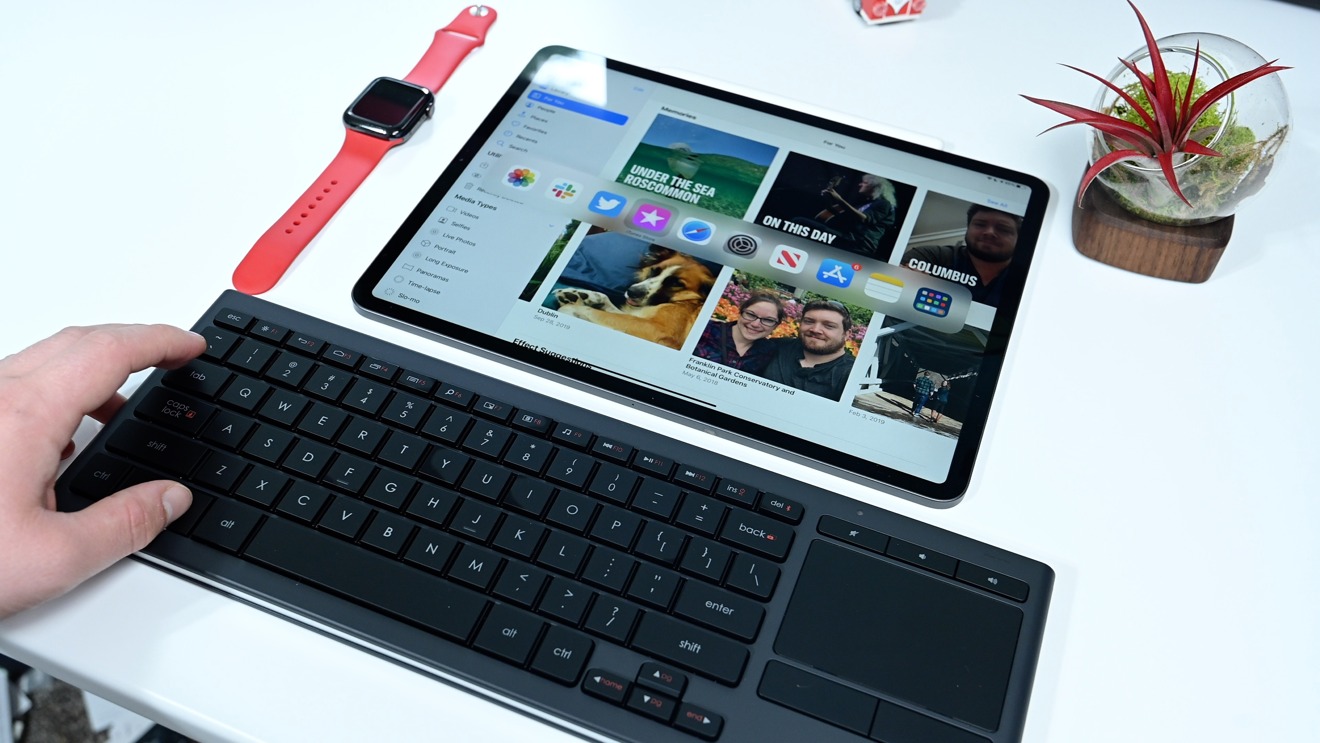 For this reason, it is clearly a Windows keyboard which means that instead of a command key it has the Windows logo on it and they are in a different layout. It’s not a dealbreaker and it still works like a Mac keyboard on iPad, just with different keys. The Windows key works like the Command key so that you can always use it for all shortcuts like the app switcher, opening a new Safari tab, or opening Universal Search.

If you can ignore this problem, it becomes a tempting option as it is both a keyboard and a trackpad. 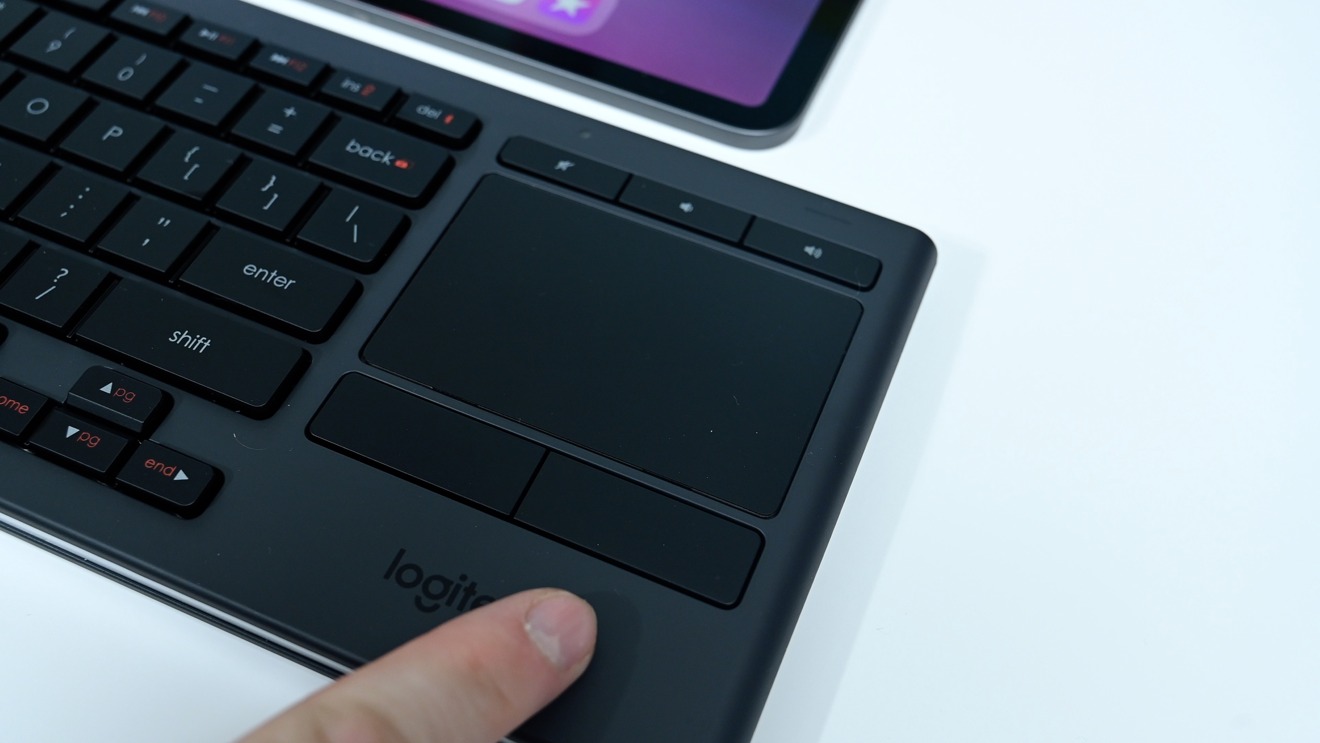 The trackpad performed well in our tests and is especially nice when the iPad is propped up by its case or on a stand. It also suffers from a slight lag, but nothing bad enough that we wouldn’t recommend it.

All of these are great options for browsing and working with iPad or iPad Pro on iPadOS 13.4 or later. Obviously Apple has an advantage, but they’re not for everyone.

Users may also be drawn to more tightly integrated solutions such as the Magic Keyboard, Logitech Combo Touch, or Brydge Pro + which also offer a bit of protection.

Whatever you choose, it’s clear that the iPad continues to be a great way to work.