Apple is exploring ways to make smart clothes, such as gloves and other wearable items, by creating ways for users to interact with devices by touching or moving clothes and accessories.

Smart gloves were a famous interface in the movie “Minority Report”

So far, Apple has had success with its portable devices, AirPods and Apple generating high sales for the business. To create more wearable products, Apple needs to find ways to bring wearable clothing into everyday life, and one way to do that is to make clothing smart.

In a pair of patents issued Tuesday by the United States Patent and Trademark Office, Apple examines two different concepts of the problem, each allowing users to exercise control over a system in slightly different ways.

The first patent, “Articles with Wire Actuators”, Apple suggests the use of actuators in clothing to provide a certain level of haptic feedback to the user. In an example of the patent, Apple proposes that an actuator can be used to vibrate when a user presses a “key” on a fabric-covered keyboard, giving a level of physical feedback to confirm a press of a button.

Apple raises the point that an actuator may be “too large” or energy consuming to be used, or may not be “compatible with the structures used to form an element of interest”. In short, Apple wants to make the actuators and connected components as small or as transparent as possible, in order to minimize their appearance to the user.

The actuators could be connected so as to have a conductive strand of material, which can be used to change the state of the actuator between positions. The strand can be connected to conductors in the fabric to a main control system. 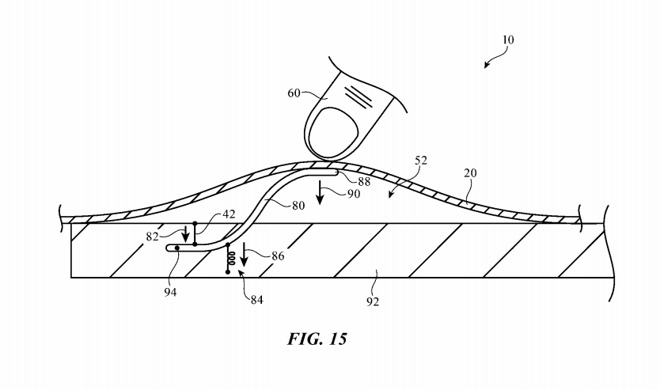 In some examples, applying current to the conductive strand could cause it to generate heat and allow it to expand, or suppress the current to cool and contract. By changing the length of the strand in this method, it can be used to affect other elements connected to it.

For example, a strand can be connected to a movable element which can force elements to move. This could be used to create a pop-up “button” for the user to press on the fabric, a button that could flatten out once the power is turned off.

The actuator could also be associated with various switches and sensors, which could be used to apply current to the conductive strands.

Magnetic field based actuators are also an option, one where the conductive strands could be turned into a non-circular cylinder. Being oval in shape, the current application could pull the cylinder into a circular shape, the change again serving as a haptic output.

A second patent called “Portable Interactive User Interface” is simpler in its application, it mainly focuses on how to use gloves or similar items to monitor the entry of a person’s hands. Although the patent talks about how the idea might work in a general sense, it often refers to gloves and hands, indicating that its main use is in this area.

The patent explains how there can be multiple detection regions on a human hand, for example, like the palm of the hand, the fingertips or the extension of the finger itself. By using sensors at your fingertips, or others capable of detecting whether a finger has been bent or straightened, these inputs could be used to control another device, such as an AR scene in an application.

These sensors could include the use of an accelerometer, a gyrometer, a capacitive network, tactile surfaces, deformation-based switches and force sensors. These can be used for each finger together, giving multiple inputs for a system to monitor and respond to, depending on the application. 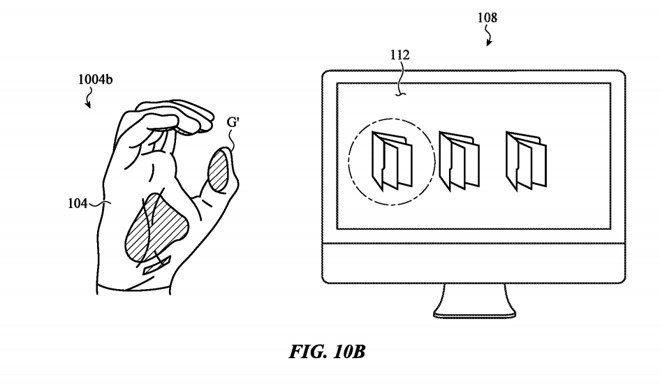 In addition, by detecting the position and movement of the hand, as well as the proximity of the fingertips to the palm and between them, gestures could also be employed on the controllable device. Apple offers in a set of images a hand movement could be used to select a folder from a list, with a gripping movement to confirm a selection, while holding a hand in a handle of mouse claw and moving it could offer a similar interaction to moving a physical mouse.

The gloves provided are also suggested to include haptic feedback systems, which may include stiffening elements affected by magnetic forces or temperature changes, or even flexible bladders. This would give users a physical response, such as resistance when “grabbing” a file or folder on a controlled device.

Part of the patent also discusses how the glove should adhere to the wearer, as moving the garment would cancel attempts to detect the user’s digits and palm because their relative positions will have changed. It is suggested to use bladders again, as well as portions in the creation of the garment which could “exert a suction force on the user”.

The authors of the patent are identified as Paul X. Wang, Zheng Gao, Reza Nasiri Mahalati and Ray L. Chang.

Smart fabric is at the heart of Apple research

Apple files numerous patent applications on a weekly basis, but although the existence of a filing suggests areas of interest for Apple’s research and development efforts, they do not guarantee that the concepts will appear in the future. product or service.

Apple has repeatedly explored smart clothing options, and gloves in particular. In January 2019, a patent covered “fabric-based devices with force detection”, with particular attention to gloves, while in April 2019, a similar concept was introduced in another patent application.

In another 2019 file, Apple used elements in an open glove design to lightly press the sides of a user’s fingers to extend the touchpad down, to increase comments when typing on a surface that doesn’t offers no haptic messaging, like a tablet screen.

In February 2020, Apple proposed systems to adjust the resistance of a piece of fabric at specific locations, and the use of fabric domes and conductors to create switches in clothing. Conductive elements have also appeared repeatedly in patents, mainly to connect together components installed on a fabric panel, without any annoying wiring being visible.