Apple’s Taptic Engine could see big changes in the future, by contextually providing users with physical feedback only in specific places on an iPhone or Apple, or by distorting the device’s case to give the user a tactile alert.

Haptic feedback is a common part of smartphone use, with the use of motors vibrating the mobile device to almost silently alert the user of events, either separately or in concert with an audible notification. While generally limited to notifications, haptic feedback is also used in other confirmation-based means, such as telling users that they’ve pressed a key on a soft keyboard or a button with Haptic Touch.

While haptic feedback is extremely useful, it’s also potentially annoying. Repeated buzzing can be a distraction for the user or others. Disabling the notification entirely could mean the user is missing something important, making it less desirable to disable it altogether.

In a patent issued Tuesday by the US Patent and Trademark Office titled “Touch notifications for electronic devices,” Apple continues with the topic of physical user notifications. However, instead of brutally vibrating the entire device, he instead proposes to make only one specific area of ​​the device be the point where physical feedback could be felt, while having a more effect. attenuated on the rest of the device.

In theory, this will result in a less intrusive and more adjustable experience for users than conventional notifications, and in some situations, it could allow users to choose to feel notifications just by touching a certain part of the device.

For this research, the focused tactile feedback area would be defined on the device. This will vary, but largely consists of areas where a user can touch with their fingers, but not too frequently and without interfering with normal use. Suggested areas include an Apple side panel, an edge of a MacBook’s trackpad, or a frame corner of an iPhone screen.

Localized haptics could be made to be felt only on small parts of a device.

One image suggests the region could be the silicone tip of the earbuds, which could mean that a notification could be felt by the user wearing them, but without any annoying noise interrupting music playback.

The device could simply be built to focus the vibrations of the haptic feedback to that specific area. It can also include a bump or ridge shape that could protrude on demand to both inform users of its purpose and accentuate low power vibrations.

The system doesn’t necessarily have to rely on localized buzzing, but can still provide hyper-localized notifications. These could be controlled by a variety of actuators, including linear, magnetic, reluctance, and electroactive versions. 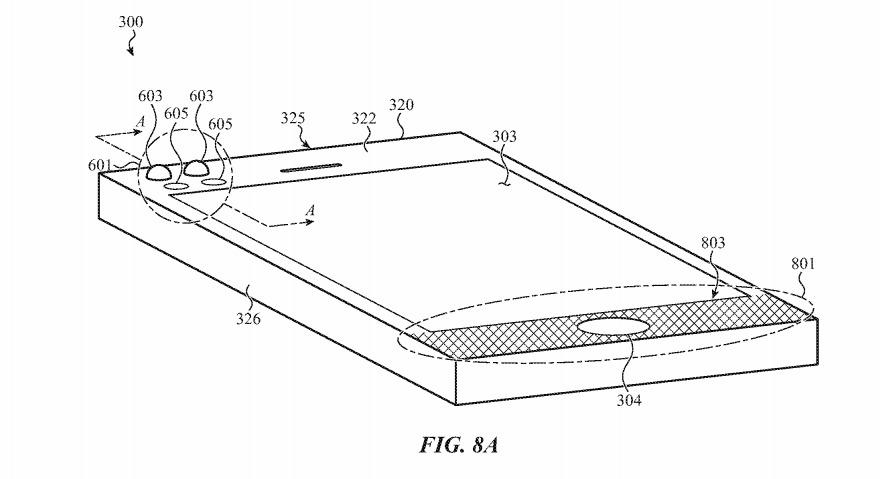 An iPhone with parts dedicated to the actuation of the sections of the case.

The patent lists its inventors as Per Haakan Linus Persson and Steven J. Taylor. It was originally filed on May 22, 2018.

Apple files numerous patent applications each week, but while the existence of a patent indicates interest to the company’s research and development teams, it does not guarantee that the concepts will appear in a future product or service.

Haptics have appeared in numerous patent filings over the years, and localized haptic feedback has appeared in some cases. A June 2020 filing suggested that Apple was considering inserting some form of haptics into buttons on an iPhone.

A more exotic form of grading is the “keyless keyboard” concept of March 2018, where Apple suggested using a secondary display as a soft keyboard for a MacBook, with haptics used to mimic key presses.

The Apple Pencil has also been a target for deposits, including suggestions that it could include vibration and weight changes, use haptics to simulate drawing on paper, and even haptics that use force feedback. shear instead of vibration.