With the release of iOS 13.7 on Tuesday, public health authorities around the world will now be able to implement coronavirus exposure monitoring without having to design their own individual apps, thanks to Apple’s planned expansion of their system. and Google.

Continuing their joint contact tracing technology, Apple and Google’s COVID-19 systems for Android and iPhone are expected to get an option to speed up implementation by regional or public health authorities. Instead of having to develop an entire custom application, authorities can now provide localized health instructions. Using the new Exposure Notifications Express, Apple and Google will present these instructions in the event of suspected exposure.

The new Exposure Notifications Express requires iOS 13.7. If a user is in a state or other territory using this extension of Apple and Google’s original system, they will be notified that the service is available. By simply tapping to confirm permission, the user can activate the feature without downloading an app.

Initially, public health authorities in Maryland, Nevada, Virginia and Washington, DC will have the new system. Apple and Google expect other states to add the functionality.

When a user is in a region where it is available, their iPhone or Android phone will continue to use their current contract tracing technology. However, they will now do so with specific reference to what each public health authority decides to be the criteria for warning users of exposure.

What the new system looks like on iPhone (Source: Apple)

Then, if this list of criteria is met, the phone will display a warning. The iPhone will then also include specific advice provided by the authority, such as directing the user to the right places for treatment or testing, and so on.

Apple and Google officials said the extension of the system was aimed at making it easier and faster for users to sign up, and was also done after consultation with health authorities.

“Exposure Notifications Express will help save lives, dramatically improve our contact tracing operations and advance our statewide recovery from COVID-19,” said Larry Hogan, Governor of Maryland. “We value our collaboration with Apple and Google, and look forward to launching this cutting edge technology in Maryland.”

Currently, COVID-19 is fatal in 3% of all cases in the United States, so finding new ways to get people to embrace contact tracing can make a significant difference in reducing the number of cases.

“We have been exploring different levels of app usage for some time in the UK, and we are very pleased to see that contact tracing apps in UK and US have the potential to significantly reduce the number of cases, hospitalizations and deaths among all levels of application use in the population, ”said Professor Cristophe Fraser, Department of Health, University of Oxford.

“For example, we estimate that a well-staffed manual contact tracing workforce, combined with a 15% participation, could reduce infections by 15% and deaths by 11%,” he said. -he declares. The UK switched to using the Apple / Google system after its first attempts at designing its own technology just didn’t work.

The new notification system is a planned extension of Apple and Google’s app-based technology, and authorities are still able to implement their own apps. More than 20 countries and regions around the world have designed applications using the system, as have states or territories covering 55% of the US population. 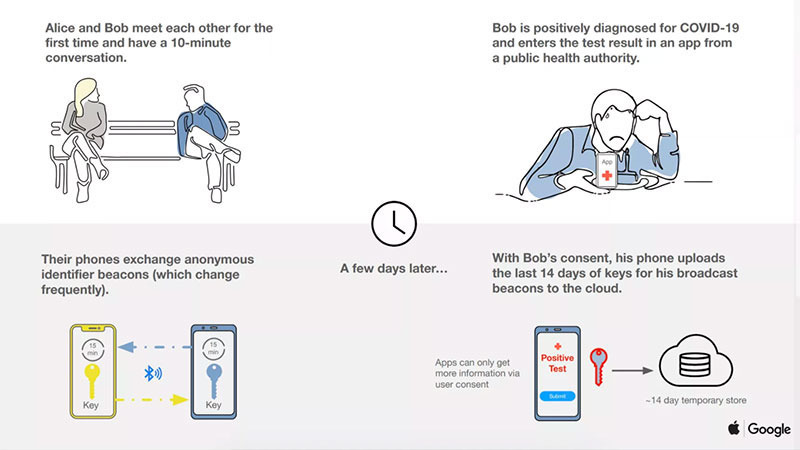 How Apple and Google’s Technology Works in Practice

As the first state in the country to launch an Apple and Google-based ENS exposure notification app [Exposure Notifications System] , Virginia is very pleased with the continued and widespread adoption of this new technology by our citizens, ”said Norman Oliver, MD, MA, commissioner of the Virginia Department of Health.

“In the first few weeks, nearly half a million Virginians downloaded COVIDWISE,” he continued. “We know that the more Virginians use COVIDWISE and receive notifications of exposure, the more effective our disease prevention activities will be in our communities. It is another important tool in the fight against COVID-19.