Apple continues to research methods of determining how a user wears headphones, to help correctly interpret touch gestures, regardless of how the headphones are worn on a user’s head.

Headphones currently available have the potential to have onboard controls, especially with wireless models, which must offer controls on the headset instead of relying on an in-line control system. This usually requires the presence of physical buttons, which can be unsightly or interrupt an otherwise clean design.

Physical buttons would be needed, in order to provide a tactile means for users to distinguish buttons from one another, based on position or shape, without having to remove the headphones or see the buttons. This blind interaction situation means that it is very difficult to implement touch screen or touch screen control schemes as it would generally depend on the ability of users to see the virtual buttons.

Complicating matters further is the myriad of positions a user could position on a headband. Moving the headband from the top of the head to the back of the neck means that the controls are rotated at least 90 degrees, which means that the positions of the touch controls do not match where the user thinks they are.

Headphones can be worn conventionally or on the back of the head.

In a patent issued Tuesday by the US Patent and Trademark Office titled “Headset Rotation Detection,” Apple attempts to address the problem by using sensors to distinguish the orientation of the headphones. By determining the rotation, this means that any gestures that are performed with the touch panels on the ear cups are more likely to be interpreted correctly, allowing the correct function to be performed.

The patent shares the same name as another issued in February 2020, performing virtually the same task, but the most recent version includes improvements over the previously registered system, covering more claims, as well as defining the types of gestures that are carried out. For example, a swipe down might be considered a command to decrease the volume, an up version might increase the volume.

In short, Apple wants to use a wide variety of sensors to determine orientation. According to the claims, this can include arrays of sensors to identify characteristics of a user’s ear in the atrium, which could be created by capacitive proximity sensors, optical sensors and structured light sensors. 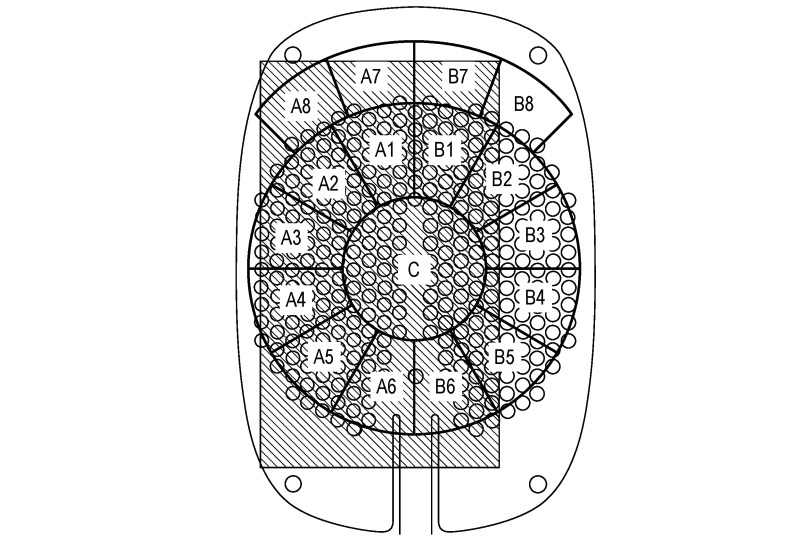 A proposal for a network of sensors and segmentation to detect the geometry of the ear.

By generating an approximate map of one of the user’s ears, the system would be able to identify the positional offset from vertical by comparing the latest sensor data to the map.

Arguably, Apple’s system may be more capable of determining directionality than the patent claims suggest. The claims refer to a “first” and “second” position, but images from the sensor arrays indicate that Apple would be able to be more precise in determining the angle of the ear, which makes it possible to ” use a wider range of positions.

The patent, filed in January 2020, lists its inventors as Brooke L. Bunney and Jonathan R. Peterson, the same duo behind the previous version. Bunney is a hardware system integrator who worked on a few other headphone orientation patents, while Peterson worked in the hardware audio products team at Apple until 2017, but now works for Facebook Reality Labs.

Apple files many patent applications on a weekly basis, but while the existence of a patent indicates areas of interest to the company’s research and development efforts, it does not guarantee that the concept will appear in a future product or service.

Rumors have it that the company is currently working on high-end on-ear headphones called “AirPods Studio”. While there are few details on the functionality of the headset, it seems unlikely that Apple would add touch panels to the sides using such a system.

Apple also looked at other orientation issues, including determining whether the headphones are worn from back to front. In such cases, Apple suggests the use of capacitive arrays to help determine which ears are being used, allowing the left and right channels to switch automatically.