Apple is developing new keyboard input methods, such as multi-function keys and touch strips, that could address the shortcomings of typing and navigation on smaller devices.

Devices such as the iPad Pro have a range of user input methods, such as a multi-touch screen, external keyboard cases, and, starting with iPadOS 13.4, support for the trackpad. On small portable devices, Apple notes that the size of UX methods “remains an issue”.

To help solve these problems, Apple has filed a patent application called “Portable Computer Input Devices and Methods” which offers a range of ideas for implementing better control mechanisms and capabilities in physical and virtual keyboards.

According to the Apple patent, there is a need for a keyboard that “introduces new multifunction keys to replace the less frequently used keys found on standard standard size keyboards”.

An example of a keyboard layout with dedicated “select”, “notification” and “share” keys.

An example of this could be a “notification key”, which could record the sensitivity of contacts and perform actions depending on how hard a user presses it. It could also determine the actions to be taken depending on the context – for example, if or when a notification is available.

The patent also describes means of implementing new capacities in existing keys, such as the integration of intensity sensors under the arrow keys and allowing “improved scrolling of the arrow keys on the keyboard” on devices devoid of touchscreen. This type of scrolling and inertia would be “intuitive,” says Apple, comparing it to a user who takes his foot off the accelerator pedal of a car. 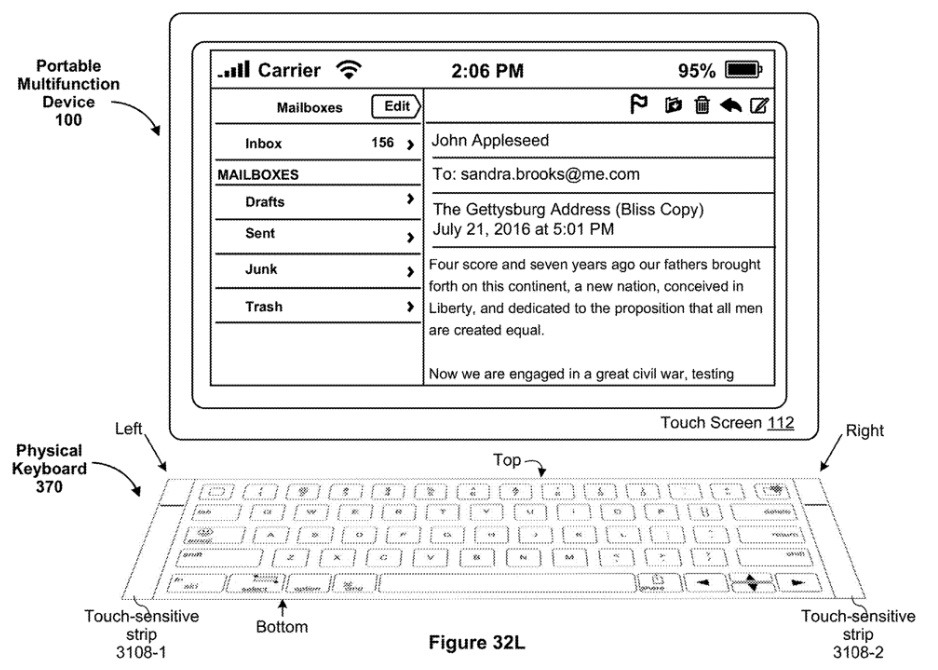 A patent figure illustrating the left and right “touch strips” of a keyboard.

Apple also suggests that certain features of the trackpad be replaced by touch strips located on the left and right of a physical keyboard. The patent essentially describes these touch strips are elongated touch pads that can allow users to scroll through the content. They would also be multifunctional and could perform actions such as bringing up the notification center if a specific gesture is made.

Other parts of the patent detail the touch-sensitive 3D input methods, based on gestures, on touch-screen keyboards, such as light pressure, deep pressure, pinching and prolonged pressing.

The inventors listed on the patent are Julian Missig, Linda L. Dong, Jeffrey T. Bernstein and Morgan H. Winer, who have all worked on many previous Apple patents. Bernstein, for example, has been listed as the inventor for a patent on a “Force Touch” keyboard for Mac. Missig was named on a patent for location-based authentication settings, among others.

Apple files numerous patents every week, and there is no guarantee that the technology described therein will be used in a finished product.