Apple Glass could use wireless basestations to offload graphical processing

Devices like the Apple Glass or an Apple-designed VR headset can take a completely wireless approach when used indoors, using a relay station to extend the range of communications to multiple users in a room.

One of the problems that augmented reality and virtual reality systems face today is the need to be close to a system that does most of the processing. The mass of data from sensors on a headset must be fed into a computing device, which must then interpret it and apply the data to rendering a scene or virtual object, and then this video data must be transmitted to a display system to be seen by the user.

Compact VR systems like Google Cardboard and the Oculus Go get around this problem by bringing all the processing to the headset itself, in a stand-alone system. However, it can increase the weight that the user has to manage on their head.

Earlier virtual reality systems and kits such as the Magic Leap One relied on connecting the headset to a separate processing unit. While this may take the form of a small, handheld unit, desktop computers are typically used for improved graphics processing.

While this can improve the visual processing of the entire system, as well as reduce the weight of the headset, the byproduct is the existence of cables that can trip or restrict movement.

In a patent issued Tuesday by the US Patent and Trademark Office titled “Relay station and base station with directional waveforming based on positional informationon,” Apple suggests creating a wireless headset that carries a battery for power, but with data rather managed by wireless communications.

A relay station can manage communications between a headset and a base station.

In essence, the system would rely on a relay station in the center of an area to be used for VR or AR purposes, which is, again, wirelessly connected to a base station in another position. It may be possible in permanent installations that the base station and the relay docking station can be connected via a cable, but the primary focus of the patent is on communications between the relay station and the headsets.

For systems with multiple relay docks in an area, such as larger rooms or warehouses, the base station connects to the closest relay dock between it and the target user. It would also be possible to allow one dock to handle the user’s incoming communications, while another relay dock transmits data, such as in cases where the signal sent to the user may be blocked by the environmental landscape. . 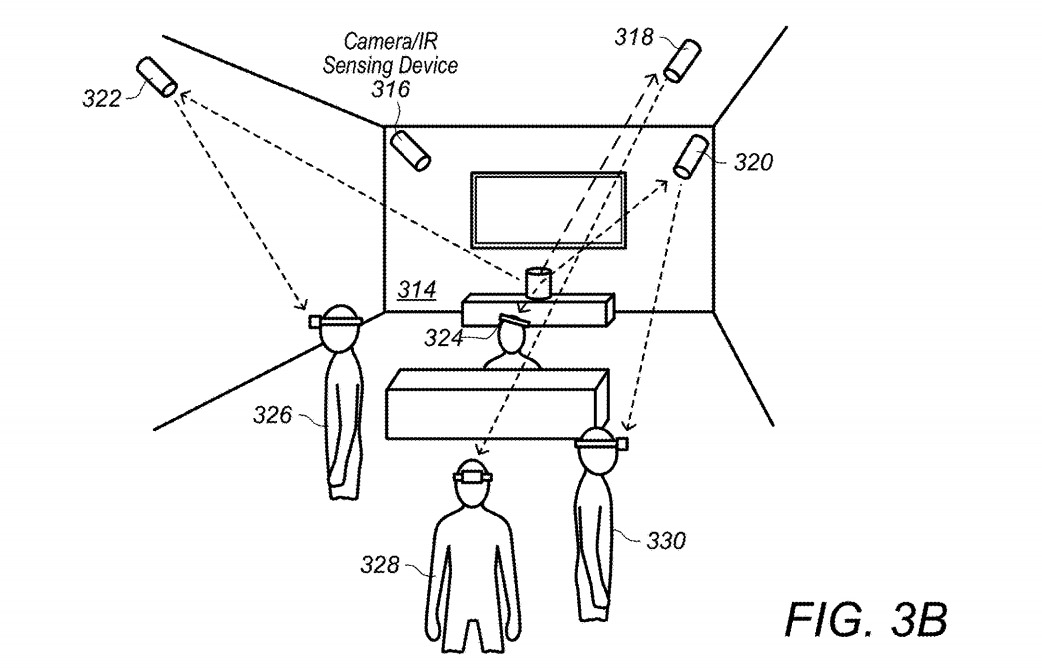 Infrared markers and sensors could determine the position of a user relative to a relay or base station.

Knowing where the user is, as well as their general movements, can allow the dock to use a beamforming motor to send an amplified signal in a specific direction. Beamforming can minimize the amount of power required to broadcast the signal to the user, as well as make the signal more private through directionality.

In the case of multiple users, the beamforming would help by reducing the potential for interference, as it would not necessarily diffuse in the direction of another user, keeping the airways clear and aiding in the reception of other signals.

The dossier lists its inventors as Yi Jiang, Mattia Pascolini, Jiangfeng Wu, Siwen Yong and Lijun Zhang. It was originally filed on September 19, 2018.

Apple files numerous patent applications every week. While the existence of a dossier indicates areas of interest for Apple’s research and development efforts, it does not guarantee that ideas will appear in a future product or service.

Apple has been keen on perfecting the VR or AR headset for some time, but there have been relatively few filings regarding communications and portability. For example, he has repeatedly suggested inserting an iPhone into a headset to use it as a small stand-alone VR system. Battery usage has also been improved, with Apple suggesting in a dossier to use wireless charging on the headset to prevent users from having to change batteries.