Although the iPhone XS has almost the same appearance as the iPhone X, the first disassembly of the latest Apple smartphone reveals a few changes on the inside, including the use of a new battery and some minor changes to other internal components.

The usual disassembly of the iPhone XS, this time through FixjeiPhone, seems at first glance the same as the treatment of the iPhone X last year. From the beginning, however, the technician who disassembles the device notices that it is more difficult to access, with the screen a bit harder to remove than before due to the waterproof seal, giving the iPhone X an improved IP68 rating for water resistance.

If the iPhone XS and iPhone X are placed next to each other, the general appearance of the internal components is very similar, with components that are on the newer iPhone in the same place as in the year old model. 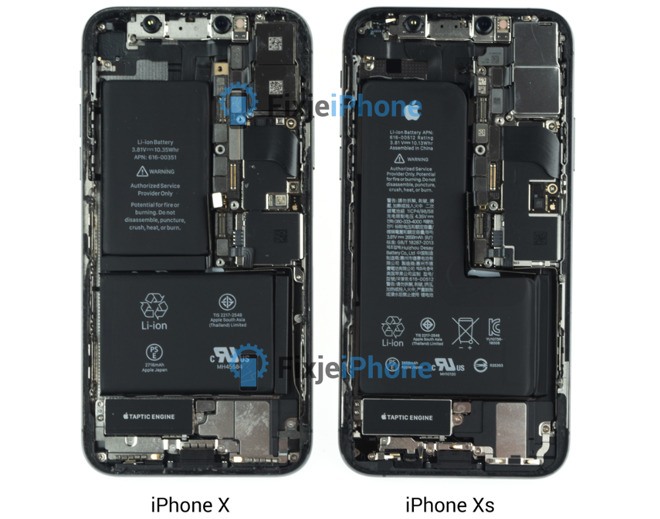 An obvious change in the design is the battery, where the two-cell L-shaped battery in the iPhone X is turned off for a version with one cell, one that retains the same shape but seems to be slightly smaller. Earlier it was revealed that the iPhone XS has a 2.658mAh battery in an official application, smaller than the 2.716mAh version of the iPhone X, but savings in energy efficiency offer an additional 30 minutes of use time in the new version.

A less obvious change is the camera module in the upper right corner of the device, where the upper part of the part appears to be larger than in the iPhone X. The upper wide-angle camera is updated with a larger pixel distance in the sensor by 20 percent, to help with light sensitivity, changing the module.

Not only does the camera change affect the internal space, it has also increased the size of the camera shot by a few millimeters, potentially causing problems with customers who want to reuse their iPhone X case with the iPhone XS.

More disassembly and other disassembly reports that are expected in the coming days can give more clues to the smaller changes in the new iPhone, including the sourcing of the components.